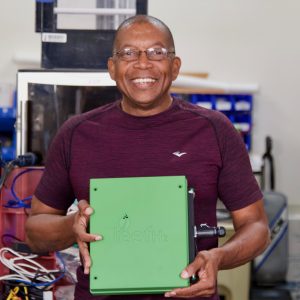 An entrepreneur with a law and engineering background, Don Owen’s path to building a greener future began in his garage. Inspired by an article on how hydrogen can increase car gas mileage and improve fuel economy, he created and tested his first prototype in his old truck.

After positive results, he went from testing his prototype at his garage to an EPA lab where he learned about particle pollution (tiny particles in the air made of dirt, soot, smoke) and one of its major components, Black Carbon. Not only that, he learned that all fossil-fuel-powered engines and devices produce particulate matter and that its effects on climate change are devastating. Yet, here he was with a potential solution.

“That was the moment my many years of tinkering and testing made me realize my company’s true purpose: to help eliminate Black Carbon and slow the devastating effects of climate change.”

Not only did he find his company’s purpose, but Don also connected to his mission on a personal level when understanding the critical effects climate change has upon rural and more vulnerable communities. He saw the current solutions and felt that seeing results ten, fifteen years later did not address the most immediate issues plaguing so many people globally.

Owens has created hydrogen fuel cells that can be retrofitted into fossil fuel engines to improve fuel efficiency and reduce emissions. With this, Owens expects to globalize adapting engines to lower their black carbon footprint and bring rapid change to fight the climate crisis.

Owens’ hydrogen technology already has over 19 registered patents that have been tested in laboratories approved by the U.S. Environmental Protection Agency. His book “Burn Fuel Better” addresses how the fossil fuel engines of today, upgraded with hydrogen technology, will build the clean energy society
of tomorrow.

Today, Owens continues creating multipleapplication hydrogen solutions meant to increase fuel-burning efficiency and reduce black carbon. He is also using educational platforms to bring knowledge on the subject and let everyone know that “we have the solution to do something about this crisis today. Black carbon is the true enemy, and now we have the technology to fight it.”