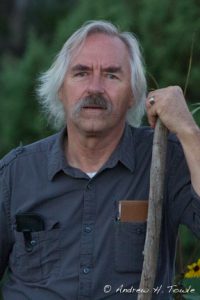 What our instructor meant was, our interpretation of the person as we saw them, not as something they wanted to project.

One of my classmate’s picked me as a subject. Like me, he was ‘older’, meaning in his middle twenties, not like most of the kids in the class who were just out of high school. They had visions photography was a glamorous ticket into a wonderful world of money and fame.

My shooter’s name is lost in the passage of time. Realizing an accurate portrait assignment gripped him with a specific goal. Shooting for a particular image of me he was focused on it. He asked if I would pose for him with certain conditions; I said sure, why not. What conditions? No primping, no getting cleaned up and when he called, I had to come as I was and take his direction.

I was drinking pretty hard then and my mind was fairly hazy most of the time. My beard was strong, my hair was getting longer, and I was wearing sport coats because I thought I looked cool with jeans and a multi-colored semi-classy jacket. Sure, why not.

What I did not realize then was he knew I was unkempt, groggy, and egotistical enough to agree with his demands. He called  one morning early, and asked if I was ready. Yeah, it was one of those mornings when I just had a beer breakfast, and off kilter enough to do just about anything.

We met at school and walked down the block to an alley behind one of the semi-industrial buildings there at the time. He asked what would feel more comfortable for me, sitting or standing? Sitting, at this point was a welcome relief.

He was chatty, and all smiles. Flattery was the right approach and he took full advantage. He had a specific image in mind and was framing the situation for the best effect. I sat on the ground in the alley with my back up against this crusty old building, sometimes leaning against a telephone pole for some of the shots.

He walked around me, taking shots from different angles; sometimes squatting down so he was at my eye level, and sometimes shooting down to me. He was short, and at the time I did not know what to call it; but he had a napoleonic complex. He had to prove himself more than others because of his small stature.

He took his shots, and when he had the images he wanted he said thanks and walked away. It was an abrupt change in demeanor. I was discarded like an empty bottle of beer.  That did not register with me at the time.

His final choice caused me amazement, anger, but satisfaction too. He saw who I was at that time, and set up a photo-session to reveal that. It must have been easier than I thought. After all, capture someone when they are most vulnerable, and easy to manipulate, and the image you want to portray becomes an easy accomplishment.

In this case, he was right on, and he knew it. The anger wasn’t too strong, as I realized he had captured me as I was then. I was just reluctant to expose myself so openly and admit it.

It was one of the most accurate images of me I’ve ever seen. I no longer have the print he gave me. I only have a fading memory. My semi-foggy stare looking like I just woke up from a night in the alley, having slept in my clothes. I liked the image, because it was so accurate.

Perhaps that is why I like shooting people. I’m attempting to find myself in the work. I’m searching for my own soul now, as it was revealed to me then.